A personal reflection of 50 years living on Old Hall Drive, by Helen Pike

In 1961 Geoff and I started our married life living on Villa Road in Keyworth. As a young mum with two very small children, and for a change of scene I would put the children in the car and drive to Widmerpool and sit by the stream on Old Hall Drive.  It was a joy to spend time in the peace of this special place. How lovely to live here was always my dream! Fast forward a few years and “Wildwood” became my dream come true!

The drive was unmade at that time, and very much still part of the farming community. Farmer Screaton grazed his cows in the fields adjoining the drive to ‘Wildwood’.  We had more than one visit from the herd going AWOL, often in the middle of the night!  We became quite practiced at rounding them up, often in the freezing cold in our PJ’s!!

At the Coach House, (in what is now a kitchen!) the cows were milked twice a day. With all the coming and going the new growth on the trees didn’t stand a chance!  Gren Strouther living at ‘Yew Tree Cottage’ (now my home), at the time complained to Mr Screaton that his cows were eating his newly planted weeping willow, “aah they will” was his reply!  In spite of the constant pruning the tree survived and grew huge, but sadly died recently.  A friend suggested we could replace it.  I agreed and we planted it in memory of our dear friends Gren and Betty Strouther and my husband Geoff.

In the early days we could drive over the bridge onto Church Lane, which is the official way to the Church, and was the regular route used by all the funeral cars. Eventually it was felt that limiting access would be advisable, so a large post appeared and ended our short cut.  Unfortunately the hearse taking a resident of Church Lane to his funeral was unable to cross the bridge as usual and consequently had to go the long way round. Somehow they took the wrong turning!  He was very late for his own funeral!! 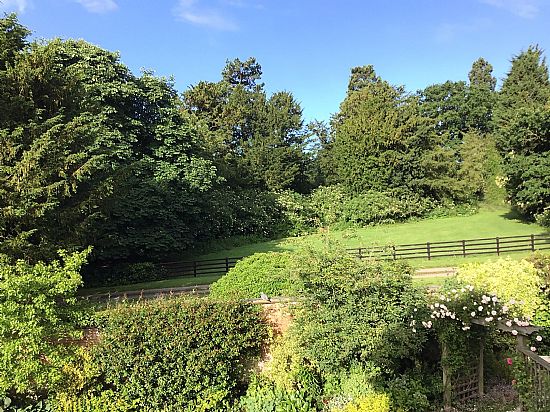 Adjacent to the Church is the ‘Beehive Lawn’.  In past times a hive with a thatched roof stood on a base of hexagonal terracotta tiles, hence the name. The Lawn and the drive were then still owned by the Egremont Estates. The Estate had their office in the Coach House, and the rest of the building was used to store everything needed by the farmer, straw, hay, feed etc.  At that time I realized a life’s ambition and, along with our eldest son David learnt to ride.  When the time came to have our own horse, Mr Screaton had retired and the cows had moved on.  I along with my neighbour Jean kept our horses in the milking parlour, the courtyard and the field.  I can remember many of the village children having a great time playing in the hayloft.  Far too many memories to mention, but how they come flooding back!

FLOODS!! We had a few! Gardeners Cottage always the worst hit.  Memories of running up and down stairs saving furniture and John’s book collection while water was coming in the front and back of the house!  The bungalow opposite was stranded, the firemen not allowing us to cross the bridge to help!  After that last bad flood the weirs were reduced to allow the water to flow better. There hasn’t been a problem since.

Widmerpool has been such a lovely village for the family to grow up in.  Several young families became very good friends, and still are to this day. (Sadly many are no longer with us.) Anyway dogs, horses and cats were added to the mix and the ups and downs of life continued.  Very soon I was persuaded to join the Parochial Church Council, and became much more involved in village life.  The Church has always been the focal point, being without a shop or pub! Eventually little by little the remainder of the Estate was sold.

The Coach House was sold and converted into a dwelling. The Church was offered the chance to buy the Beehive Lawn at a very reasonable price.  Unfortunately that offer also included the upkeep of Old Hall Drive and the stream to its centre.  For the Church to take on such a big commitment was not feasible financially, so sadly the PCC had to refuse.  To our great relief three village members saved the day and purchased the land between them. Their idea was that the Beehive Lawn was to be for use by the church and the village for events.  To keep the precedence, the church was to arrange an event at least once a year.  Hence the birth of the Village Picnic and Barbecue!!  Always the first Saturday in August, weather permitting!  I urge any residents and friends, and those new to the village to join in.  This is a great way to get to know each other.  Many other super events have taken place over the years, too numerous to mention here. It’s great that we still enjoy the benefit today.  Hopefully the younger ones will continue to arrange many more social occasions for the community spirit of this unique village to survive.

Following the purchase of the land and drive, it was decided by mutual consent, that we should have a proper tarmac road.  All the home owners paid an equal share and the road as you see today was laid.  The upkeep is maintained under the same arrangement. 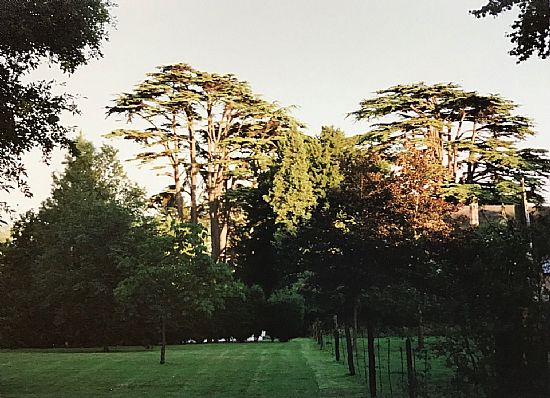 We have been so lucky to have inherited some wonderful trees along the drive which include Scots Pines, Holly, Yew and many more, plus of course the mighty Cedar of Lebanon.  When my husband Geoff and I moved here there were five Cedars in Widmerpool.  Apart from the one on Old Hall Drive sadly the other four have gone in our time.  One in the Hall grounds split in half due to the great weight of wet snow one winter.  There was also one in the grounds of the Vicarage on Church Lane.  In 1990 the two in the churchyard (see right) met their demise after almighty winds swept through one night.  I actually heard one come down.  The following morning I was horrified to see the devastation.  Sadly one fell onto the other Cedar in the church yard which eventually had to be felled.  For anyone interested, there are photos in the Church of the upturned tree which contained many bones of ancient bodies buried in unmarked graves under the site where the tree was planted. My youngest son Andrew and Anne were the last couple to have their wedding photos taken under that tree, like many, many couples before them!  They have been married for thirty years this August, and have also brought up their family at ‘Wildwood’.  David my eldest son also lives in Widmerpool on Old Melton Road.

When it came to downsizing, Geoff and I were so fortunate to acquire ‘Yew Tree Cottage’ in 2000, and still to be able to live on Old Hall Drive. Things never stand still and the Drive is still evolving.  The turning area near the Church has been improved by enlarging the hard standing.  Thanks to Geoff Brooks. Hopefully no more visitor’s cars getting stuck in the mud! Due to several thefts of lead from the church roof, plans are in place to replace the lead with material less attractive to thieves!  So it continues!

Neighbours come and go, but for me, after fifty years it is still a joy to be here, and I consider myself and my family blessed to have lived in this very special place for so long.